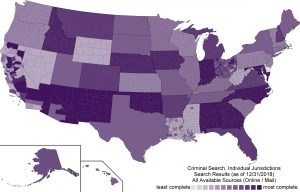 Why not? Because it just doesn’t exist.

Let’s talk about courts and criminal records in the US.

Currently, there is no comprehensive national database for all the criminal records in the US. Yes, the FBI does maintain several databases of criminal records throughout the US. However, the only one that is appropriate for pre-employment screening requires fingerprints. It’s usually reserved for certain industries that require a higher level of scrutiny.

Now the federal government does keep records of criminal convictions in federal court. However, those cases usually don’t include crimes such as simple assault, minor drug offenses, and DUI (unless they occurred on federal property). There is a difference between state court and federal court.

States are separate and different

Each state in the US has its own separate judicial system. They are not connected to each other. Although there are similarities, the court structures are different.

For example, North Carolina has District Courts and Superior Courts in each of its 100 counties. Ohio has Common Pleas, County Court, and some Municipal Courts. Georgia has State Court, Superior Court, and Magistrate Court. All of these courts interact with the other courts within their state but not usually with courts in other states.

In addition, each of these states has a different way to process and record court decisions and criminal records.

Courts may be independent

Not all states have a comprehensive statewide criminal database available to the public.

In North Carolina, all courts report to a single, searchable database. This is a rarity.

In Ohio, each court is responsible for maintaining its own records. This means, for example, that to completely search criminal records in Cuyahoga County, investigators must search Bedford, Berea, Cleveland Heights, Cleveland, East Cleveland, Euclid, Garfield Heights, Lakewood, Lyndhurst, Parma, Rocky River, Shaker Heights, South Euclid, and Common Pleas. There are 88 counties in Ohio, but searching all of the courts in Ohio would require an individual search of over 200 different courts.

Not all records are online

This seems impossible in the 21st century, but it’s true.

Picture a sparsely populated county in Mississippi or Wyoming. The entire population of the county may be only a few thousand people. Suppose court is only held on the second Monday of each month. They probably have computerized records, but they don’t have the budget, resources, or personnel to make those records available online. The only way is to search in person, via mail, or by phone.

There are other details about courts and records in the different states, but these are the basics.

So if there is no single database, how do other companies offer a “nationwide criminal search”? They build their own database. That might sound like a good idea, but there’s a whole host of problems associated with that, such as inaccurate information, missing information, and information that’s included when it probably shouldn’t be. There’s a blog post on our website about “What’s missing from your nationwide criminal search”. It goes into more detail about what information can be left out of these compiled databases.

So if Protus3 doesn’t offer a “nationwide multi-state search,” what do we do? Well, the first thing we do is look at where the subject has lived, worked, or gone to school. This is why an address search is so important. If they’re available, we check statewide records first. Then we look at individual counties or municipalities as needed. The process is much more accurate.