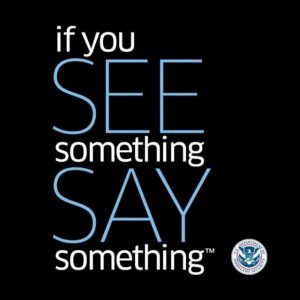 10 Times See Something, Say Something Saved Lives in 2019

We’ve all heard the recommendation: See Something, Say Something. Does it really work? Absolutely.

Campus Safety Magazine reported the ten examples below. Each provides an example of how advanced reporting helped to avert a potential incident.

So we’ll say it again: See Something, Say Something.

When: August 2019
Where: Barton Elementary School, Lake Worth, Florida
What: A mother threatened a mass shooting at her children’s new school after they switched schools due to redistricting.
Source: https://www.miamiherald.com/news/local/article233789472.html

The man contacted Palm Beach County Sheriff’s deputies. He told them he also received messages from Perez. The messages stated, “I’m thinking of doing a school shooting at Barton” and “Yep. It’s there [sic] fault.”

Perez told sheriff’s deputies she sent the messages and had contemplated shooting up the school. She said she would never actually do it, according to the arrest report.

When: August 2019
Where: Central Connecticut State University, New Britain, Connecticut
What: The FBI’s National Threat Operations Center received a tip that 22-year-old Brandon Wagshol was “attempting to purchase large-capacity rifle magazines from out of state,” according to a news release.
Source: https://www.ctpost.com/local/article/Police-Tips-prevented-3-potential-mass-shootings-14342621.php

The FBI and Norwalk police launched a joint investigation and found Wagshol was buying parts online to build his own rile and “had a Facebook post that showed his interest in committing a mass shooting.”

Investigators executed a search warrant and found a handgun, a rifle, a rifle scope with a laser, four forearm optic sites, a firearm flashlight, body armor with a titanium plate, a full camouflage outfit, a camouflage bag, a ballistic helmet, tactical gloves, and numerous rounds of ammunition.

When: August 2019
Where: Seabreeze High School, Daytona Beach, Florida
What: A 15-year-old was arrested after threatening to shoot and kill people at his school.
Source: https://www.tampabay.com/news/2019/08/20/a-15-year-old-student-is-fifth-floridian-charged-with-threatening-a-mass-shooting-this-month/

“I Dalton Barnhart vow to bring my fathers (sic) m15 to school and kill 7 people at minimum,” the student wrote on the gaming platform Discord.

Another Discord user alerted the FBI to the threat. Members of the FBI Joint Terrorism Track Force were able to track the IP address to the boy’s home where he lived with his mother.

Body camera footage of his arrest shows the student admitting to making the threats as a joke. The mother can also be heard saying there is a gun in the house.

When: August 2019
Where: Daytona Beach, Florida
What: Tristan Scott Wix, 25, was arrested after his ex-girlfriend showed authorities a series of text messages threatening a mass shooting.
Source: https://www.cnn.com/2019/08/18/us/daytona-beach-mass-shooting-threat/index.html

Wix told her he already had a location in mind and that “a good 100 kills would be nice,” and that he’d “wanna break a world record for longest confirmed kill ever.”

“Ah well even if you told someone, me saying I wanna do it and think about it is not the same as actually doing it lol,” another message read. “Was kinda hoping someone would come into my life worth not doing it for, for the sake of all those people (laughing cry face emoji). I’m not crazy I just wanna die and I wanna have fun doing it, but I’m the most patient person in the world.”

Wix told investigators he did not own any firearms but that he was fascinated with mass shootings. Police recovered a rifle and 400 rounds of ammunition in his apartment.

When: August 2019
Where: Jewish Community Center, Youngstown, Ohio
What: James Patrick Reardon, 20, was arrested after he posted a video on his Instagram account of him firing a gun and tagged the Jewish Community Center.
Source: https://www.cnn.com/2019/08/18/us/youngstown-ohio-jewish-community-center-threat/index.html

A caption on the post, which was shown to an officer who was on an unrelated call, read, “Police identified the Youngstown Jewish Family Community shooter as local white nationalist Seamus O’Rearedon.”

New Middletown Police Chief Vincent D’Egidio said Reardon’s Instagram account included many images of himself or someone else shooting guns and had lots of anti-Semitic comments and white nationalist content.

Reardon also appeared in a 2017 National Geographic documentary about the Unite the Right Rally.

“We need someplace that can be a white homeland or we will be bred out,” he said.

When: August 2019
Where: Ferris State University (Michigan), area hospitals
What: Police arrested 33-year-old Arnold Holmes after he posted multiple YouTube videos threatening a Ferris State University professor, area hospitals, a veterans’ affairs office and military police.
Source: https://www.9and10news.com/2019/08/21/ferris-state-university-releases-new-details-about-threat-investigation/
The university said they dealt with Holmes before and kicked him off campus in the spring semester.

Authorities received a tip of the videos and quickly identified Holmes as a suspect.

Family members said Holmes served two tours in Iraq before being discharged from the Marines in 2012. They said that he has struggled with his mental health since then.

“I feel like the police did their job properly, they were great with us,” said Holmes’ girlfriend. “It’s sad that it came down to this, but I mean I think he felt this was the only way to go about it. Hopefully, after this, a change can be made and he can get help and can go on with his life and not do this again.”

When: August 2019
Where: Floyd Dryden Middle School, Juneau, Alaska
What: Two 13-year-old boys were arrested and charged with felony terroristic threatening for planning to take a gun to school and shoot people.
Source: https://www.juneauempire.com/news/breaking-two-juneau-middle-schoolers-arrested-for-planning-school-shooting/

A classmate heard the two students discussing their intent to carry out a school shooting and told his parents. His parents contacted police, who then alerted the school.

“We really want students to know there are significant consequences now to making threats like this,” said Juneau School District Superintendent Bridget Weiss. “Words and pictures matter. They do indicate threat.”

When: August 2019
Where: Burns Middle School, Brandon, Florida
What: A 12-year-old girl was arrested for threatening a mass shooting over SnapChat.
Source: https://www.abcactionnews.com/news/region-hillsborough/12-year-old-arrested-for-posting-mass-shoot-threat-toward-hillsborough-middle-school-online

“Dear bms students I will be shooting that skool [sic] up September 3 2019 be ready say your goodbyes to you’re [sic] family because that is finel [sic]…Goodluck (; be ready,” the post said, according to the sheriff’s office.

A student at nearby Barrington Middle School saw the post and told their school resource officer.

Deputies said the seventh-grader admitted to sending the threat and later deleting it.

After examining the fake firearm, officials said they found the accuracy to a real AR-15 “troubling.”

“Tell you right now, officers encounter this at a school, out on the streets, someone jumps out of a car, points it at an officer – there’s a high probability of a deadly confrontation,” said Detective Larry Gaines. “There’s no way to tell this a fake weapon without actually having it inside your hands.”

The students went to their counselors who notified the school resource officer, who then collaborated with Gainesville Police.

Authorities said the suspect collected knives and had been planning the attack for at least two weeks.

One of the church’s reverends said the suspect visited the church on the Wednesday before her arrest. The normally-scheduled Bible study didn’t take place that evening.