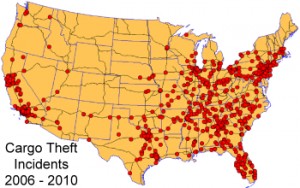 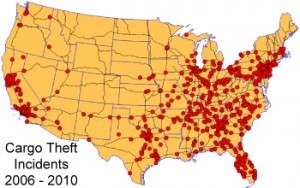 Where are the vulnerabilities in the supply chain? When and where are goods the most at risk in during shipping? FreightWatch, a logistics security services company, analyzed five years of cargo theft statistics as a way to answer these questions. They produced a report that provides security and loss prevention personnel with information about trends in cargo theft, allowing companies to better predict and prepare for theft in order to mitigate losses. The ever-changing tactics of thieves requires constant vigilance.

RMA has been in the business of reducing crime and protecting business assets for over 24 years. Supply chain security depends on a comprehensive security program. Let us help you identify and mitigate the gaps in your program.

US Cargo Theft: A Five‐Year Review

FreightWatch has been collecting cargo theft data for the United States since January 2006. Theft incidents are recorded by date, city, county and state of occurrence, specific location (such as truck stop, roadside, warehouse), theft event type, product type, and value of the stolen load.

Until now FreightWatch has analyzed data and reported results by month, quarter and year.
Although this periodical information is vital for professionals in the supply chain industry to react immediately to trends, the shifting patterns of cargo crime are not always apparent in shorter-term studies.

With statistics now available for a full five‐year time span (January 2006 through December 2010), FreightWatch was able to assess trends and anomalies that transcend the boundaries of short‐term reports and thus provide our readers a much broader picture of this ever‐changing criminal enterprise.

Highlighted in this unprecedented report are the following findings:

As is apparent by these findings and others in this report, the five‐year study served to underscore some established industry wisdom as it pertains to cargo thieves and their actions. The FreightWatch maxim that “Freight at Rest is Freight at Risk,” for example, is a now a proven fact for cargo in general.

More importantly, however, the study has brought to light trends that will allow a prudent shipper or transportation provider to take appropriate and timely steps to prevent or mitigate cargo theft in the future.

Above all, the study makes clear that efforts to improve security and harden the supply chain for certain product types have had success, but that the supply chain industry in general remains in dire risk from cargo thieves who have proven adept at shifting to softer targets.