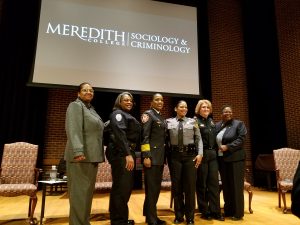 Protus3 has a long history of partnerships with law enforcement agencies, but the Raleigh Police Department holds a special place in our collective heart. Many of our current and former employees got their start at RPD.

We would like to take this time to recognize Chief Cassandra Deck-Brown of the Raleigh Police Department in honor of Black History Month. You are a living example of making history! And we want to congratulate you on your upcoming retirement on April 1, 2021.

Chief Deck-Brown started her career at the Raleigh Police Department in 1987 and was promoted to chief in 2013. She became Raleigh’s first black female Chief of Police.

At that particular time, there were six black female police chiefs in NC, most in major cities. These chiefs represented a high-level shift in an industry that has always been and is still dominated by men. Each of the women on the panel demonstrated that leadership, determination, goal setting, and fearlessness know no boundaries. In the words of Napoleon Hill, “What the mind can conceive and believe, it can achieve.”

We would like to wish Chief Deck-Brown all the best in her retirement!